The applause was thunderous. Big Bob Probert was back.

The date was March 22, 1990. And Probert was making his season debut for the Red Wings after yet another battle in the courts—the one type of fight that no. 24 could rarely seem to win.

Probert, the bruising forward with fists of granite, had been suspended by the NHL, concurrent with his incarceration after being found in possession of cocaine in the summer of 1989 at the Detroit-Windsor border. When Probert’s time in prison and a halfway house was over, the league granted him permission to play again.

Probert’s return in March of 1990 coincided with the Red Wings’ desperate attempt to qualify for the playoffs. His presence was hoped to provide some sort of boost to the team’s post-season chances. Only six games remained in the season when Probie came back, and the Red Wings were a handful of points out of a playoff berth.

The Red Wings were in fifth place in the five-team Norris Division at a time when the top four clubs in each division made the playoffs. The team directly above the Red Wings in the standings, the Minnesota North Stars, were in town when Probert stepped onto the ice for the Red Wings for the first time in nearly a year.

Despite the cheers, despite the electricity in Joe Louis Arena, Probert’s return couldn’t help the Red Wings, who lost that night to the North Stars, 5-1.

The Red Wings went 1-4-1 in their supposed playoff push, and missed the tournament by six points. Probert played in four of those games, registering three points and, naturally, 21 penalty minutes.

Those final six games, with the Red Wings welcoming Probert back for a push, represent the last time the regular season drained away without a team from Detroit making the Stanley Cup playoffs.

The playoff streak almost ended last year during the lockout-shortened 48-game season, but a four-game winning string to close the schedule lifted the Red Wings into the post-season.

It appears that another frantic, late-season push is going to be needed for the Red Wings to extend their playoff-making streak to 23 years.

But whether the Red Wings squeeze in or not, the future looks much brighter now than it did before Thanksgiving.

The infusion of youth, mostly necessary due to injuries, should give Red Wings fans reason for optimism. The water bottle is half-full, not half-empty.

The playoffs would be terrific, of course, and not just because of The Streak.

It would be wonderful to give the likes of Tomas Tatar, Tomas Jurco and Riley Sheahan a taste of Stanley Cup playoff hockey, for example.

But with all due respect to the AHL, which has been a fine minor league for the NHL for decades, those playoffs can’t truly compare to the Stanley Cup playoffs.

The Red Wings may not be able to give their kids, who have done so much for the team this season, a dose of playoffs, NHL-style, this spring. In fact, given the team’s youth and thinness because of injuries to key players, the playoffs are unlikely.

It would be an upset if the Red Wings qualified. Tuesday night’s 4-1 loss in Columbus, which featured a third period collapse, is more representative of who the Red Wings are at this point.

Playoffs or no playoffs, it doesn’t matter.

The Red Wings’ future is brighter for all the regular season experience the kids are getting, which should make the team much deeper when everyone gets healthy and reports to Traverse City for training camp in September.

According to TSN’s Gord Miller via TSN’s Pierre LeBrun, the Red Wings are sending forward Patrick Eaves, a third-round draft pick and a prospect to be named to Nashville for Legwand, a Detroit native who’s played his entire 15-year career as a Predator. In fact, Legwand is technically an original Pred, having joined the team as an 18-year-old in Nashville’s maiden NHL season of 1998-99.

The Red Wings were in desperate need of depth at center due to season-ending back surgery for captain Henrik Zetterberg and Pavel Datsyuk’s trick left knee.

Legwand, 33, is in the last year of his contract and can become an unrestricted free agent at the end of this season. In 62 games this season with Nashville, Legwand had 10 goals and 30 assists. He shoots left.

The Red Wings have called up C Riley Sheahan from Grand Rapids.

Sheahan, 22, was the team’s first round draft pick in 2010 after playing one year at Notre Dame. Sheahan played two more seasons for the Fighting Irish before joining the Griffins in 2012. He has had two cups of coffee for the Red Wings and his next game for Detroit will be his third in the NHL.

A correlating roster move hasn’t been announced yet for Sheahan’s call-up, but candidates to be replaced are Justin Abdelkader and Johan Franzen, who left Saturday and Sunday’s games, respectively, after hits to the head.

On the injury front, the Free Press’ Helene St. James tweeted this out re: Henrik Zetterberg:

Some good news for #RedWings: Henrik Zetterberg (back) has started skating. If no setbacks, could return Dec. 28 at Florida.

The Red Wings have recalled forwards Luke Glendening and Patrick Eaves from Grand Rapids, and according to the Free Press’s Helene St. James’ Twitter feed, goalie Jimmy Howard will miss 2-4 weeks with a sprained knee.

Lots  more injury news with the Red Wings, and none of it is good.

First, captain Henrik Zetterberg is being moved to the long-term IR list, to make room for the recall of goalie Petr Mrazek, who was called up from Grand Rapids. Mrazek takes the place of Jimmy Howard, who according to The Majors Facebook feed, has tweaked a knee. The move of Zetterberg to long-term IR means Z is not eligible to return to the Red Wings until December 28.

Second, much-ballyhooed free agent signee from last summer, Stephen Weiss, has a groin injury and the pain is so severe that he had to shut it down during practice today in St. Petersburg, FL, where the Red Wings are preparing to face the Tampa Bay Lightning on Thursday night.

The Red Wings say that captain Henrik Zetterberg will miss a minimum of two weeks with a herniated disc in his back.

Back problems are nothing to mess with, especially for hockey players. Just ask Mickey Redmond, whose career was ended at age 28 because of a bad back.

GM Ken Holland said Zetterberg complained about back spasms following the Red Wings’ win in Ottawa on Sunday. No word yet on how the Red Wings plan to fill Z’s roster spot.

Zetterberg said back issues have come and gone for years, but it felt worse than usual after Ottawa game.

Zetterberg said he knew something was wrong the last couple of games. Same disc that bothered him before. Evaluate again in couple weeks. 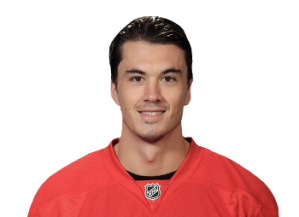 The Red Wings have agreed to a contract extension with D Jonathan Ericsson.

Ericsson, 29, was set to be an unrestricted free agent at the end of this season.

Mike Babcock is doing it again.

Back in 2008, during the first round of the playoffs, goalie Dominik Hasek was having a devil of a time stopping the puck, specifically in Game 3 and 4 against Nashville. The Red Wings lost both games, losing a 2-0 series lead. The Predators were scoring in bunches, which is how they won the the two games in Nashville.

Babcock said that the “puck can’t keep going into the net,” and made what I thought was one of the gutsiest moves by a Detroit coach, and that was to replace Hasek with Chris Osgood for Game 5 and for however long the Red Wings would last in the playoffs.

The Red Wings went on to dispatch the Preds in six games and won the Stanley Cup—with Osgood in net.

Tomorrow night against the Bruins in Detroit, Babcock will go with backup goalie Jonas Gustavsson in goal for the second straight game instead of Jimmy Howard. Gustavsson was in net on Sunday in the Red Wings’ 3-1 win in Buffalo.

Babcock used a similar line after Howard’s latest loss—4-2 against Ottawa on Saturday.

“The puck’s going into the net,” Babcock said.

Howard, this season, has bore little resemblance to the confident goalie with swagger who stepped onto the ice with a chip on his shoulder. His numbers tell most of that story.

“Let’s be clear, we’ll go as far as Howie takes us,” Babcock said, as reported by the Detroit News’ Ted Kulfan. “He’s an elite goalie who it hasn’t gone as good as he’d like to lately. We’ll give him a breather to work with Jimmy (Bedard, Red Wings goaltender coach).”

And as for Gustavsson?

“You can’t ask from your second goaltender more than we’ve got from him,” Babcock said.

Howard seems to know what the problem is, even if fixing it is far more complicated.

“Maybe I put a little too much on my plate, and for me personally, I just to have concentrate on going out and stopping pucks,” Howard said. “(I’ve been) trying to go out there and trying to make everything look great when all you have to do is keep the puck out of the net.”

It’s official: Gustav Nyquist will be a Red Wing for the remainder of the season, at least.

GM Kenny Holland told the media, as reported by George Sipple of the Free Press, that the RW Nyquist will play on Saturday against Ottawa at Joe Louis Arena. This is significant because once Nyquist plays one more NHL game, he can no longer be sent back to the AHL’s Grand Rapids Griffins without first clearing waivers.

Given his skill set and his two-goal game Thursday in his season debut, it’s highly unlikely that the 24-year-old Nyquist would make it through waivers, so Holland’s announcement that Nyquist will suit up on Saturday was essentially the same as announcing that Nyquist will be a Red Wing the rest of the season and beyond.

Holland also gave an update on the Red Wings’ two summer free agent signees who are both battling groin injuries. Stephen Weiss and Daniel Alfredsson are “close” but won’t return to the lineup in either weekend game (Ottawa at home on Saturday and at Buffalo on Sunday).

Defenseman Brendan Smith, who’s been a not-so-subtle target of coach Mike Babcock’s for suspect play, returns to the lineup tonight after missing 16 days with a separated shoulder.

Babcock has used tough love on Smith, who the coach likes but is still critical of Smith’s play without the puck. Smith is minus-7 this season.

It didn’t help Smith’s cause when, after being a healthy scratch in October following a minus-4 game, Smith told reporters that the minus-4 wasn’t due to any break down on his part.

But during his time recovering from the shoulder, Smith has kept his mouth shut and his ears open, soaking in advice from Niklas Kronwall, for one.

“I was focusing on some of the plays Kronwall would make and how he jumped up in the rush,” Smith said. “I like how Nik can have such a good gap at all times. He makes it very efficient for himself that way. When he has good gap, obviously, nobody is going to beat him.” Follow this blog
The Winged Wheeler
Blog at WordPress.com.