The Red Wings won their third straight game today—all without the injured Pavel Datsyuk—as they whitewashed the NY Islanders, 5-0, on Long Island.

Never has a player earned the No. 1 star quite like Helm did. His second goal was a shortie, and he was around the puck all game long.

The shorthanded goal was one of the most magnificent you’ll ever see.

Using his blazing speed, Helm outraced Radek Martinek to the puck at the Isles’ blue line, putting Helm on a collision course with NY goalie Kevin Poulin between the circles. Helm flipped into a partial somersault over Poulin’s right pad, tipping the puck in the process. The puck and Helm’s stick both ended up in the net.

It could have been a nightmare play, too. The way Helm’s legs hit Poulin’s pad was actually quite scary. And with Helm’s injury luck, you kind of held your breath. But he was fine, and the shortie gave the Red Wings a 2-0 lead at 16:49 of the second period.

Alfredsson’s first goal was a breakaway from the blue line, courtesy a nifty breakout pass from Brendan Smith that was threaded through sticks and skates from inside the Red Wings zone. Alfie buried a snap shot over Poulin’s left shoulder for a 3-0 lead 12 seconds into the third period.

Howard had to make a point blank stop with under a minute to play to salvage his shutout.

The line of Helm, Alfredsson and Johan Franzen was brilliant—combining for four goals and two assists.

The Red Wings (13-7-7) have their first three-game winning streak in a month.

BOTTOM LINE: Perhaps the Red Wings’ most complete game of the year. Hardly anything to complain about.

THE WINGED WHEELER SAYS: Coach Mike Babcock had a “doghouse” line of Stephen Weiss, Daniel Cleary and Mikael Samuelsson playing together. Cleary got an assist, on the Helm shortie. This was Red Wing hockey we all know and love: puck possession, hard on the puck in the attacking zone and strong goaltending when necessary—plus secondary scoring. Let’s see if this is the start of something good. 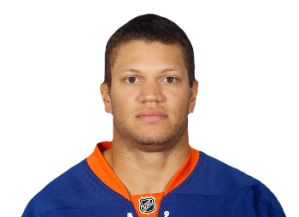 Kyle Okposo is only 25 years old, but he’s already a grizzled veteran.

Okposo is in his seventh NHL season, all with the NY Islanders. The RW was drafted 7th overall in the 2006 NHL Entry Draft, and he made his NHL debut as a 19-year-old in the 2007-08 season.

He is the only NHL player, for sure, born to a Nigerian father and a Caucasian mother.

Okposo isn’t a goal scorer, but he’s a hard-nosed, gritty player who isn’t afraid to stick his nose where it doesn’t always belong. Okposo’s style of toughness isn’t necessarily reflected in his penalty minutes total, but there’s no question that he is well-respected around the league.

The trouble is, Okposo goes largely unnoticed because he plays for the Islanders, a team that hasn’t really been relevant often since their glory days of the early-1980s.

For example, even in his 24-goal campaign, Okposo was a minus-15.

Okposo fell back to four goals in 48 games in last year’s lockout-shortened season, but his worth to the Islanders is reflected in his $2.8 million/year salary, based on a five-year contract signed in spring 2011. His value to the team is also acknowledged in Okposo being one of the Isles’ alternate captains.

In 25 games this season, Okposo has six goals and 22 points.

Okposo has big ideas, i.e. qualifying for the 2014 Winter Olympics for Team USA.

US coach Dan Bylsma said on November 22 that Okposo is part of a group of about “six or seven” forwards that the coaching and executive staff, led by Predators general manager David Poile, are keeping a close eye on over the next few weeks. The deadline to select the final 25-man roster is Dec. 31.

Okposo wears no. 21 for the Islanders.

The Red Wings and the Islanders get it on, circa 1972.

If a tie is like kissing your sister, then what is gaining a point by losing in overtime or a shootout?

How about, what is it if you do it five straight times?

The Red Wings played their nightly overtime/shootout game tonight on Long Island, and as usual, they lost it.

Frans Nielsen scored the only shootout goal, and the NY Islanders defeated the Red Wings, 5-4. The Red Wings pushed the game into overtime when Pavel Datsyuk scored with :43 left in the third period.

The loss leaves the Red Wings with the very odd record of 9-5-7—which is the NHL’s nice way of saying that you’re 9-12.

You can fairly say that the Red Wings just aren’t equipped to win the NHL’s skills competition, but that really doesn’t make any sense. Why would that be so? Pretty much any NHL player should be able to score a goal now and again while on a clear cut breakaway against a goalie.

The more logical explanation has to do with approach.

The Wings, in shootouts, tend to do more dipsy-doo than they do shoot-em-up.

In other words, maybe less frou-frou?

Or else, the team should just learn to win games in regulation or overtime.

The Red Wings played this one on the road, which calls to mind a quote from witty coach John McKay of the hapless expansion Tampa Bay Bucs.

“We have now proven we can’t win on the road or in front of our home fans. So we would like to play at a neutral site.”

Daniel Alfredsson was an unhealthy scratch with a groin injury.

BOTTOM LINE: This shootout/OT loss streak is kinda crazy. Makes you wonder if the Red Wings will finish with a record of 9-5-68.

THE WINGED WHEELER SAYS: If you’re looking for a bright spot, it’s that for the second straight game, the Red Wings got goal scoring from players not named Datsyuk and Zetterberg. But if you’re a doom and gloom guy, the goaltending continues to not be good enough to steal a win. Jonas Gustavsson wasn’t awful, but he wasn’t exceptional, either.

It’s OK if you’d like to call Frans Nielsen “The Great Dane.”

The NY Islanders are not anything at all like the glamour team they were in the early-1980s, when they went to five straight Cup Finals and won four of them (all in a row). In fact, until they qualified for the playoffs last season, you could be excused if you were wondering if the Isles were still in the league.

Therefore, you’re also excused if Nielsen isn’t a name in your household.

But the 29 year-old center has pumped in nine goals in 20 games this season, far outpacing his career norm—a career in which Nielsen has scored 69 goals in 387 games.

Nielsen is the first Dane to ever play in the NHL—something he accomplished when he stepped onto the ice during the 2006-07 season and played in 15 games for the Islanders.

Nielsen is known for his tight checking and defense, but he does have a career high of 17 goals scored—something he did in 2011-12, when Nielsen played in every game. His play was Lady Byng-like, as Nielsen was whistled for just six penalty minutes all that season. In fact, Nielsen has racked up just 84 penalty minutes for his entire career.

Nielsen’s defensive prowess is mainly noticed during the penalty kill. In 2010-11, Nielsen led the NHL with seven short-handed goals.

Nielsen was drafted in the 3rd round of the 2002 NHL Entry Draft (87th overall). The 6’1″, 180 pound center didn’t sign with the Isles right away; in fact, he played with the Swedish Elitserien for five years before finally signing with New York.

It was after that 2010-11 season—the one with all the shorties scored—that then-Islanders captain Doug Weight called Nielsen, “our best all-around player even though his stats don’t necessarily show it.”

Oh, one more thing: Nielsen holds the distinction of being the most successful NHL player all-time in shootouts. His signature move has been called “The Danish Backhand of Judgement.” He features a forehand version, too.

Nielsen wears no. 51 for the Islanders.

Bob Nystrom brings home the first of 4 straight Stanley Cups for the Islanders by scoring the Cup-winning goal in OT on May 24, 1980.