They don’t catch their skates on the blue line. They don’t lose 12-2. They don’t spend 60 minutes every night chasing the puck like they have blindfolds on. They don’t look up at the scoreboard as soon as the National Anthem is done playing and see themselves trailing 2-0.

The Golden Knights don’t do any of those things. In fact, they’re playing as if they’ve been in the league for 10 years.

The Golden Knights have cooled a little since their 8-1-0 start, but at 11-6-1 they’re making a mockery of what being a freshman NHL team used to entail.

I come from the days of the 1974-75 Washington Capitals, an expansion team that won a grand total of eight games in their maiden season, with only one of those wins coming on the road.

The NHL has expanded a bunch of times since those laughable Caps, but never has a brand-new team taken the league by storm as the Golden Knights have this year.

The Golden Knights play at T Mobile Arena, where they’re 7-1 and averaging nearly 18,000 fans a night. They have no history and are building their legacy game by game. Yet not only could Las Vegas’ new NHL team qualify for the playoffs as an expansion team, they could (gulp) win the Pacific Division. As I write this, the Golden Knights are just one point behind the first-place Los Angeles Kings.

You wanna bet against a team that plays in Vegas? What is that even like?

Granted, the NHL doesn’t currently throw its expansion teams to the wolves the way the league used to do back in the day, when all first-year franchises were put behind the 8-ball when it came to building a respectable roster. Expansion teams were bringing a knife to a gunfight every night.

Hence those ’75 Capitals, with a roster dotted with players who would have been hard-pressed to qualify for other NHL teams’ minor league affiliates.

Still, even though the NHL has rejiggered the way newbies can procure NHL-ready talent from the drop of the first puck, for the Golden Knights to be doing what they’re doing is unprecedented. They became the first league expansion team to win seven of their first eight games, to wit.

So who coaches these guys, anyway?

Gallant, after a suspect firing in Florida, is living the good life in Las Vegas.

There’s a reason why Gallant wasn’t out of work for very long after being given the ziggy by the Florida Panthers almost a year ago (Nov. 27, 2016).  Gallant was snatched up by the Golden Knights just five months after being let go by the Panthers.

I think the Panthers will come to rue the day they let Gallant go, if they haven’t already.

Gallant led the Panthers to a 47-26-9 record and an Atlantic Division championship in 2015-16, but Florida lost in the first round of the playoffs to the New York Islanders, who joined the NHL as part of the league’s third expansion in 1972.

But after a mediocre 11-10-1 start last November, new Panthers GM Tom Rowe fired Gallant. This morning, the Panthers woke up with a 7-9-2 record. Just saying.

This isn’t Gallant’s first rodeo with a brand new NHL franchise. He was minding his own business as an assistant coach for the fourth-year Columbus Blue Jackets in 2004 when head coach Doug MacLean was fired, elevating Gerry into the big chair. Gallant spent parts of three seasons as the Jackets coach, then eight years after his last game coached in Columbus, he returned to the NHL as head coach of the Panthers in 2014.

Gallant won 38, then 47 games in his two full seasons in Florida, yet the Panthers, an expansion franchise themselves (Class of 1993) that hasn’t exactly been synonymous with on-ice success, broomed Gallant.

It didn’t take long after Gallant was fired in Florida for fans in other NHL cities to pump for Gerry as their team’s new coach—even if there wasn’t a vacancy.

One of those teams’ fan bases was Detroit’s. 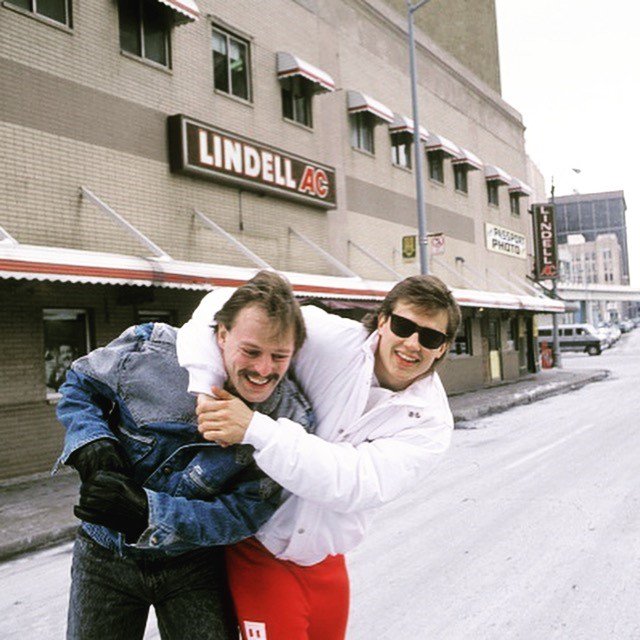 In the late-1980s and early-1990s, Gallant played the tough second to Steve Yzerman in Detroit.

“Gallant envy” runs throughout league, including in Detroit

Red Wings fans clamored for a time, before Gallant was announced in Las Vegas, for the team to cashier Jeff Blashill and hire old no. 17 to take Blash’s place.

It was more than mere nostalgia that drove the “Hire Gallant” sentiment. It was more than remembering the 207 goals that Gerry scored while playing for the Red Wings—many of those coming while patrolling Steve Yzerman’s left side, when Gallant and Bob Probert were sandwiched around Stevie and “kept the flies off him,” as former Red Wings coach Mike Babcock would say.

The pro-Gallant feeling that other teams’ fan bases have is based on the reputation Gallant has as being very Babcock-like behind the bench: a winner who is tough, who is not your friend but who is also fair. Babcock himself has been described as a modern day Scotty Bowman type—a coach that players might curse under their breath but under whom also enjoy great on-ice success.

“Players really, really enjoy playing for (Gallant),” Yzerman, now the GM of the league-best Tampa Bay Lightning, said recently about the Golden Knights’ success under Gerry, which doesn’t surprise Stevie in the least. “He’s not easy, by any means. He’s not your buddy, but he’s straight forward and he’s honest.”

Gallant is consumed by hockey. “It’s his whole life,” ex-teammate Yzerman said. But even an old-time hockey guy like Gallant can’t truly explain the eye-opening, early-season success of his Golden Knights.

What Gallant is doing in Vegas—and it’s part of why he’s coveted by envious fans of other teams—is he’s keeping his players relaxed, hungry and getting them to believe in themselves. That’s a trifecta that not every NHL coach can pull off.

Knights center Jonathan Marchessault has more experience than his teammates in playing for Gallant, because he did it in Florida as well.

”He wants us to be loose, make plays and have confidence; and I think that he gives us confidence,” Marchessault said recently. ”For a coach, it’s kind of rare. You’re scared to do mistakes. But with Turk (Gallant’s nickname), it’s not like that. He wants you to try hard and if you do a mistake, at least you do it while you’re trying hard.”

The Knights do have one expansion team quality, however: they’ve already used five goalies in 18 games. One of them is grizzled veteran Marc-Andre Fleury, a three-time Stanley Cup winner in Pittsburgh. Fleury has only played in a handful of games so far, but team management understood that it can’t hurt to dot the roster with guys who’ve tasted the NHL’s ultimate measure of success.

Gallant himself never won a Cup as a player, but he played on two Red Wings teams that made the Final Four (1987 and 1988). At his best as a player, Gallant was known as one of the league’s upper echelon power forwards—a guy who could score 30 goals, fight and keep the opponents honest. He was Brendan Shanahan in Detroit before Brendan Shanahan.

Can the Golden Knights keep this up? They’re an expansion team, for crying out loud. Don’t they know that their place is among the league’s dregs?

Not according to Gerry.

“I want my guys coming here with a clean slate every day,” he says. “We don’t worry about what we did yesterday, we worry about what we’re going to do tomorrow and the next day. We know we got a long way to go and we know if we let up one bit we’re not going to win hockey games. If we continue to play the way we’re playing right now, then we can beat any team, any given night.”

So far, 11 times in 18 games, the Golden Knights have done just that.