Historically, the NHL goalie has been a bundle of raw nerves.

Glenn Hall used to throw up before every game, then down a glass of orange juice.

Roger Crozier went into brief retirement at the age of 25, suffering from stress, depression and pancreatitis.

Roy Edwards battled anxiety as hard as he did pucks.

Terry Sawchuk was the best goalie of them all, and also the most tormented, internally.

Jimmy Rutherford would wake up in a cold sweat, demonized by dreams of dozens of pucks being fired at him simultaneously.

It was about a decade after his retirement when I caught Rutherford in another moment of nerves.

Jimmy, the old Red Wings goalie during the debacle of hockey for the franchise that was the 1970s, was the general manager of the OHL’s Detroit Junior Red Wings at the time. I was directing TV coverage of the Junior Wings’ games. This was December, 1991.

A couple of days prior, Rutherford gave the ziggy to coach Andy Weidenbach, and named himself coach.

Jimmy’s first game behind the Junior Wings’ bench happened to coincide with one of the televised games. It was a snowy night, so nasty that the opposing team’s bus was running late to Joe Louis Arena. Jimmy hadn’t coached a game since he did so for the OHL’s Windsor Spitfires in 1987.

Rutherford, his goalie’s nerves kicking in once again, paced the hallway outside the Junior Wings’ dressing room, arms folded, staring at the floor. He was the loneliest man in Detroit. That’s when I caught him.

“What a night for this to happen, eh?” I said, smirking, knowing that he was nervous enough about making his coaching debut for the Junior Wings without the game being delayed.

Jimmy shrugged. “What can you do? I just want to get this over with.”

The Junior Wings won that night, in a game that started about two hours late.

Jimmy didn’t stay long in coaching. He found the executive washroom much more to his liking.

The Karmanos family, which owned the Junior Wings, ended up buying the NHL’s Hartford Whalers. Peter Karmanos tabbed Rutherford to be his GM in 1994, and Jimmy stayed in that position after the team relocated in 1997 and became the Carolina Hurricanes.

Rutherford—they called him “Roach” in his playing days—was diminutive as a goalie (5’8”) but has become a front office giant in the NHL.

He built the Hurricanes into a Stanley Cup finalist in 2002 and the ‘Canes won the Cup in 2006.

In 2014, Rutherford was hired away by the Pittsburgh Penguins, one of the four teams he played for in the NHL. In Pittsburgh, Rutherford won another Cup (2016) and now his team is back in the Finals.

Last year, Jimmy was named NHL General Manager of the Year. He’s the dean of the league’s GMs, having held the position for one team or another for the past 23 years.

Rutherford was the Red Wings’ goalie when the team was awful. He played his heart out, but the team in front of him rarely returned the favor. Pucks flew at him from all directions; hence his bad dreams.

Yet Rutherford holds the Red Wings record for most consecutive shutouts by a goalie—three—set during the 1975-76 season. 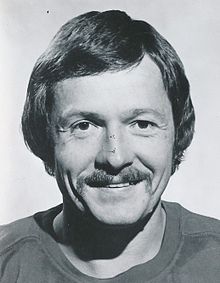 It’s not a stretch to say that Jimmy Rutherford, beleaguered goalie turned NHL executive, should be a serious Hall of Fame candidate.

When he took the Penguins job in 2014, the first thing he did was fire the coach, Dan Bylsma, who won a Cup in 2009. Jimmy didn’t succeed in the front office by being afraid to be bold.

Jimmy, who’s 68 now, is in his autumn years as a front office man. In fact, upon accepting the Penguins gig, he indicated that his stay would be two, maybe three years. He wanted to groom the next GM and be that guy’s mentor.

“This is a job that most GMs would love to have,” Rutherford said when hired by the Pens. “I was very lucky and very fortunate at this point in my career that I could get this opportunity.”

The Penguins, no doubt, would have said, “Right back at ya, Jimmy.”

Penguins president Dave Morehouse was effusive in his praise when the team announced Rutherford’s hiring.

“Jim is one of the most respected executives in the National Hockey League,” he said. “He also exemplifies class and dignity. We started identifying candidates for the GM position a few weeks ago and we knew he was someone we needed to talk to.”

It’s been three years in Pittsburgh, with a Cup won and another possible. What about Jimmy’s original plan, to stay for three years and pass the puck? After all, Rutherford signed a three-year extension with the Penguins last July.

“I don’t really think about it, so I guess the fact that I’m not thinking about it, I guess it’ll be for a while longer, whatever that means,” he said when asked about succession plans a couple weeks ago.  “When I start to think about something, it doesn’t usually happen that quick. I usually think about it for quite some time.”

Rutherford’s ability to retool the Penguins on the fly has the team on the verge of a second straight Stanley Cup, which hasn’t been done since the 1998 Red Wings.

The mentoring/grooming thing is bearing fruit now. The Buffalo Sabres recently hired Rutherford’s assistant, Jason Botterill, to be their GM.

But right now it’s all about hockey—not retirement or mentoring or reflection.

Another Cup is there to be won. It would be Rutherford’s third as a GM. Not bad for a goalie who played in exactly eight playoff games in his 13-year NHL career.

The nerves will return, of course, when the puck drops on Monday night for Game 1 of the Finals. Just as they were front and center during Game 7’s double overtime victory in the Conference Finals series against Ottawa.

If the Penguins win the Cup in a couple weeks, Jimmy Rutherford, the old goalie, should start thinking about preparing a Hall of Fame induction speech.