Sometimes, a firing of a coach in the world of sports is a mercy killing.

Vitale’s promise of Pistons Paradise and ReVitaleization, which he crowed about when he was hired in May 1978, had turned into a ghoulish joke after 18 months, 94 games, 34 wins and the stripping of the franchise’s future thanks to ill-advised trades of the team’s draft picks.

“Mr. Davidson probably saved my life. And I’m not exaggerating,” Vitale would later say about his stomach troubles and health while he tried to endure the losing.

It was a summer’s afternoon in 1990 when Red Wings owner Mike Ilitch paid a visit to his coach, Jacques Demers.

It was an emotional meeting. Both men openly wept.

But Demers later credited Ilitch for being “a man about it” and for delivering the news in person. Demers also admitted that his time in Detroit had gone stale and the Red Wings needed a new voice.

The new coach was Bryan Murray. It’s a tent pole moment in Red Wings history because when Murray took over the Red Wings prior to the 1990-91 season, it marked the last time that so few experts and fans expected anything out of a Red Wings team.

Only the most optimistic of fans can truly say, in their heart, that the 2016-17 Red Wings can make some real noise.

Only the delusional can look at this team and see serious advancement in the Stanley Cup playoffs next spring.

The timing of this crossroads in franchise history is potentially very unfortunate.

If the Red Wings sink into a several year rebuild/reload scenario, it will overlap with the team’s move into new Little Caesars Arena next fall.

The thought of missing out on the revenue from playoff games in their new ice palace for several seasons must rankle Ilitch and his family.

But it might be a necessary evil, for the Red Wings to be a mediocre, middling team until the youth kicks in.

They’ll drop the puck tonight in Tampa to launch another NHL season—the Red Wings’ 90th in Detroit, dating back to 1926-27 when they were known as the Cougars.

It’s fitting in a way that this potentially crossroads season starts in Tampa.

In the Lightning executive suite high above the ice, watching the action, will be GM Steve Yzerman.

Yzerman cut his teeth as a Hall of Fame player wearing the Winged Wheel and he was a front office apprentice in Detroit after he hung up his skates. Some would say that the student has lapped his mentor, Red Wings GM Ken Holland.

As the Red Wings enter a season of the unknown—they could squeeze into the playoffs or finish at least 10 points out—Yzerman has built a consistent Stanley Cup contender in Tampa.

Stevie Y has only been on the job for six years, and it’s not like the Lightning were a league powerhouse when he took over.

Ironically, the Red Wings could learn a thing or two from Yzerman, who is now entrenched as one of the NHL’s best and most admired front office men.

Yzerman’s Lightning have blasted Holland’s Red Wings out of the playoffs the past two seasons.

After almost 20 years as Red Wings GM, maybe Holland’s time to move on has come.

In defense of Holland—who’s been the GM since 1997—and his lieutenants, the Red Wings have never been a mediocre team under Kenny’s watch. This whole rebuild/reload thing is new to him. I’m not sure that he’s wired for it, or up to the task. I also doubt whether he’s terribly interested in it.

Last spring, Holland tried to brace the fans in Hockeytown to expect some less-than-spectacular things from their hockey team.

“There are probably five or six teams that are legitimate Stanley Cup contenders” this season, Holland told NHL.com. “After that five or six, there are 20 teams without much difference between them. We’re in that group of 20.

“Certainly there are lots of questions about our team.”

Despite its reality, it was also a stunning admission from a man who loathes to do anything other than show the utmost confidence in his team. Since he took over the GM duties 19 years ago, Holland has only known winning and Cup contention.

This can’t be easy for him—emotionally and functionally.

Ken Holland isn’t wired to transition a veteran, elite team into a young, mediocre squad trying to find its way.

The Red Wings, if things aren’t planned well, could become the NHL’s version of the Oakland Raiders—a proud team with iconic uniforms and logo whose mystique wore off long ago.

If things really go to pot, the Red Wings could also become the Edmonton Oilers, who’ve been bumping into themselves for over 20 years.

He’ll always be a Red Wing at heart but maybe he’d be better served somewhere else.

Somewhere like Ottawa, where the Senators are on their seventh opening night coach in 10 years—an NHL record.

Coaches aren’t the only people who know when their time has come to move on.

With only one surname can you be a Hall of Fame defenseman and yet not even be the best hockey player in your own family.

Sadly, Mark Howe is now the best living hockey player in his clan, after father Gordie passed away in June.

Mark went into the Hockey Hall of Fame in 2011. But in hockey, even that high honor doesn’t mean that the sport is done recognizing you.

It was announced last week that the younger Howe is one of two winners of the Lester Patrick Trophy, for outstanding service to hockey in the United States.

The award’s significance is in inverse proportion  to its notoriety. I doubt that more than 4 out of 10 die-hard hockey fans could tell you what the Lester Patrick is.

The trophy is named after one of ice hockey’s founding fathers.

It’s not overstatement to say that Lester Patrick is hockey’s Alexander Cartwright.

Patrick is the founder of no less than 22 rules that are still in use in today’s game. He’s been called “the Brains of Modern Hockey.”

He introduced the blue line, the forward pass and the playoff system—a change adopted by other leagues and sports around the world. Patrick took a suggestion by his father to begin using numbers on players’ sweaters and in programs to help fans identify the skaters.

Patrick was responsible for crediting assists when a goal was scored, and he invented the penalty shot.

So yeah, to win the Lester Patrick Trophy is sort of a big deal.

Longtime Red Wings coach and GM Jack Adams was the first recipient of the Lester Patrick, in 1966.

The Big One was elusive to Howe as a player—having made the Finals three times in his career (Philadelphia in 1985 and 1987 and Detroit in 1995) but there was always another team skating the Stanley Cup around the ice when the final horn sounded.

The bridesmaid part of Howe’s career was stomped to pieces once he took off his skates and donned wing tip shoes to work for the Red Wings in their scouting department.

Howe’s name is engraved four times on the Stanley Cup, though no doubt he’d exchange all of them to have held the Cup aloft just once as a player.

It almost happened in Detroit, where Howe signed with the Red Wings in 1993 as a 38 year-old on the back end of a career in which he was a multiple Norris Trophy finalist for best defenseman in the NHL.

After a bitter first round playoff loss in 1994, Howe returned for one last go-round, which was the strike-shortened 1995 campaign.

But the storybook ending that every Red Wings fan was hoping for—son winning his first Cup playing for the same franchise as his world-famous dad—was turned into a horror story by the maddening, left wing lock-playing New Jersey Devils, who swept the Red Wings to capture the Devils franchise’s first championship.

Howe was 40 and his winning the Stanley Cup was clearly not meant to be. He retired but stayed with the Red Wings organization, even though he played a majority of his 22-year professional hockey career with the Philadelphia Flyers and Hartford Whalers (Carolina Hurricanes). 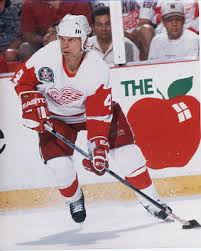 Howe, playing in the 1995 Stanley Cup Finals, in his last shot at the chalice as a player.

The folks who dole out the Patrick—the NHL and USA Hockey—don’t just pull names out of a hat.

“As the Lester Patrick Award observes its 50th anniversary and the National Hockey League prepares to celebrate its Centennial, we are extremely pleased that Mark Howe and Pat Kelly are receiving this recognition for their decades of devotion to hockey in the United States,” NHL Commissioner Gary Bettman said in a statement.

Howe’s honor is not in recognition of his being the son of Gordie Howe. Marty Howe didn’t win the Patrick, did he?

Mark Howe is getting the Lester Patrick because he started playing organized hockey in the United States as a teenager and some 45 years later, after a stellar playing career in Houston, Hartford, Philadelphia and Detroit, he’s still a major component of one of the NHL’s legendary franchises.

Did you know that Howe is the Flyers’ all-time leader in goals and assists for a defenseman?

But despite his 10 years with the Flyers, Mark Howe will always be a Red Wing to the hockey denizens in the Motor City.

At first that designation was by proxy due to Howe’s lineage, but in the summer of 1993, then-GM Bryan Murray took a flyer (sorry) on the aging defenseman and brought him to Detroit for one last kick at the can. Mark Howe would be a real, honest-to-goodness Red Wing.

Howe’s Cup never runneth over as a Red Wings player, but in the front office the rings have been aplenty.

The ceremony honoring Howe and Kelly will be November 30 in Philadelphia—as part of the U.S. Hockey Hall of Fame induction festivities.

In his book, Gordie Howe’s Son: A Hall of Fame Life in the Shadow Mr. Hockey, Mark Howe answered the age old question.

“Interviewers have asked, ‘What’s it like being Gordie Howe’s son?’ I’ve always assumed it was no different than being anybody’s son who grew up in a loving, supportive family.”

That family may have lost its patriarch, but the name lives on proudly.