When the NHL was ramping up its discipline against hits from behind some two decades ago, it was no less than Gordie Howe who offered his own version of common sense, hockey style.

“If I’m chasing a guy,” Mr. Hockey opined, “then how the hell can I hit him from the front?”

Hard to argue with that!

Gordie is 87 now and it appears that he still has a few elbows left , and maybe some hits from behind, for the Grim Reaper—and I don’t mean Stu Grimson.

Mark Howe, Gordie’s middle son, offered some words of encouragement for fans the world over of his dad.

“Dad has the will to want to live again and I’ve never seen a better competitor or fighter in my life,” Mark Howe told NHL.com the other day.

This will to live didn’t necessarily exist about a year ago at this time, Mark said. Gordie’s body had been riddled with a series of strokes, the last of which in October 2014 having done the most damage.

“We had seen something in dad that we had never seen before [at that time] and that was dad quitting. He didn’t want to partake in any physical therapy or eating, lost 35 to 40 pounds in six weeks and his life was basically going down the tubes.”

That was before Gordie was taken to Tijuana, Mexico to undergo some stem cell treatment in his spine. The trip to Mexico was necessary because such treatment isn’t available for humans in the United States or Canada.

The meteoric rise of Gordie’s health, attributed to the stem cell treatments, has been the subject of debate.

But what’s not debatable is that Mr. Hockey’s quality of life has improved substantially over the past 12 months.

We are lucky in Detroit. So many of our sports heroes are still around, even though we’ve lost our share.

Joe Schmidt, inventor of the middle linebacker position, is still in relatively good health at age 83 and is not living in seclusion.

We still have Al Kaline, who will be 81 next month. Al is no wallflower, either.

Dave Bing will be 72 tomorrow and his voice can be heard all over Pistons promos that the team’s marketing people pumped out this year.

And Gordie Howe, who isn’t just Detroit’s—he’s a North American treasure—is still mucking it up in the corners.

With social media and the Internet’s constant blasting of information and news updates, we are more exposed than e 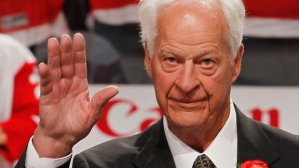 ver to the passing of celebrities and former athletes. That’s why it can seem like our sports heroes are dropping like flies.

It’s that time of the year when we all are supposed to be thankful, so let’s have gratitude for who we do have left in our midst.

But of all the Detroit athletes mentioned above, it’s Gordie Howe’s health and well-being that’s been the most documented, the most discussed and the most intriguing.

Perhaps this is because that, at one time, Howe appeared to be ageless.

He was the George Burns of sports.

Someone once asked the entertainer/comedian Burns what his doctor thought of George smoking a cigar in his advanced years.

Gordie Howe was never shy to dispense a wisecrack as easily as he was an elbow to the face.

At Steve Yzerman’s jersey retirement ceremony on January 2, 2007, I did some work for Fox Sports Detroit. My job was to corral special guests to be interviewed during whistle stoppages.

One of the targets was Gordie, and I spoke to him briefly before the game, giving him some instructions and letting him know that I’d be coming for him.

“Bleep off,” he told me, bursting into that big, Gordie grin.

It was a badge of honor that I still wear proudly to this day.

Gordie Howe told me to bleep off.

“Hey young man,” Gordie said, clapping Bettman on the shoulder. I half expected him to ruffle the commissioner’s hair.

And Bettman stood, wide-eyed, as Gordie regaled him with some comments, though sadly outside my earshot.

Maybe the best news that Mark Howe had was that not only is Gordie holding his own physically, but his famous personality has also returned.

“He’s getting around pretty well and he knows who you are,” Mark said of his dad. “I do a lot a lot of Facetime [communication] with him and he knows me. When he’s speaking, every so often it disappears so he does a lot of hand gesturing. Other than that, from where he was a year ago to now it’s just amazing how well he’s doing.”

As far as love affairs go, it was at times tumultuous, the relationship between Sergei Fedorov and the hockey fans in Detroit.

Mention Stevie Yzerman and Nicklas Lidstrom’s names in Hockeytown and the fawning will begin in earnest.

Gordie Howe, Alex Delvecchio, Sid Abel, Terry Sawchuk and Ted Lindsay will get you nothing other than a bow down on one knee from the person to whom you utter the names.

And it’s not Normie Ullman’s fault that he wore the same no. 7 immortalized by Lindsay, but Normie scored 324 goals for the Red Wings and it’s too bad that he gets forgotten about in Detroit.

Ullman’s name should be in the rafters at Joe Louis Arena, as well as at the new arena that will open in a couple of years. And I’m not one to retire numbers like they do at the deli counter.

I believe that if you’re going to take a number out of circulation forever, then your case ought to be pretty damn compelling. To me, it’s almost as hallowed as being inducted into that sport’s Hall of Fame.

Which brings me back to Fedorov.

You bring up Fedorov in Detroit and it’s not a slam dunk, like it is with the other men whose numbers have been retired by the Red Wings.

Fedorov doesn’t emit the same aura as his honored teammates Yzerman and Lidstrom.

You can’t find a soul in Detroit who’ll besmirch no. 19 and no. 5, but no. 91 will sometimes elicit an eye roll and a snort of disgust.

It’s the same old thing with the Detroit sports fan: you’d better not leave on your own volition.

There are two things the sports fans in the Motor City demand from their pro athletes: loyalty, and empathy for their pain.

The lack of the latter is what got Prince Fielder turned into a pariah in this town.

And the perceived lack of the former is why Fedorov doesn’t get nearly the same love as Yzerman and Lidstrom, with whom Sergei won three Stanley Cups.

That’s some not bad company.

Sergei is in the Hockey Hall of Fame now, fair and square. He was formally inducted on Monday night, along with Lidstrom, who goes by the nickname The Perfect Human.

Fedorov, the Imperfect Human (tying him with billions of people around the world behind Lidstrom), has waited long enough. It’s time to put aside whatever rancor is left about Fedorov and string his stinking number into the rafters at The Joe.

I can still hear some gasps of indignation.

But he left! He left us!

He had a weird relationship with Anna Kournikova!

Yes, Fedorov bolted town as a free agent in the summer of 2003, defecting for the second time in his life, this time for Anaheim.

rov’s contract holdout in 1998 was something that Yzerman and Lidstrom—and every other Red Wing, frankly—never engaged in.

But what should really matter is what Fedorov did on the ice for the Red Wings, and this is where it gets ironic.

Those are just four Detroit athletes whose off-the-field/ice issues are legendary.

Probert, with the bottle and the drugs.

Denny with his suspensions in 1970 for carrying a gun and for dumping ice water on a sportswriter—long before the ice bucket challenge existed.

Cabrera with his DUI arrests.

Layne with his party-hearty ways.

Yet Probert was about as popular as Yzerman in his heyday with the Red Wings.

McLain returned from suspension in 1970 to thunderous applause at Tiger Stadium.

Cabrera is revered in Detroit.

And Layne is so worshiped in Motown that some folks actually think he put a curse on the Lions.

So why doesn’t Fedorov get the same accommodation?

I think of the three grievances listed above, the most egregious to Red Wings fans is Fedorov leaving via free agency, which none of the aforementioned stars ever did.

Probert was waived. McLain was traded. Cabrera is still here. Layne was traded.

None of them left on their own volition, and Detroit sports fans don’t like it when their athletes bid adieu willingly.

It’s time now to get over that with Fedorov. It’s not like the Red Wings stopped winning Stanley Cups after Fedorov left.

And I’m not a “retire his number!” kind of a guy. The case has to be compelling.

With Sergei Fedorov, it is.

For the Red Wings’ part, GM Ken Holland said in July that the team would consider honoring Fedorov with a number retirement ceremony.

The Red Wings have had four months since then to hash it out.

This morning, Sergei’s plaque is in the Hall in Toronto.