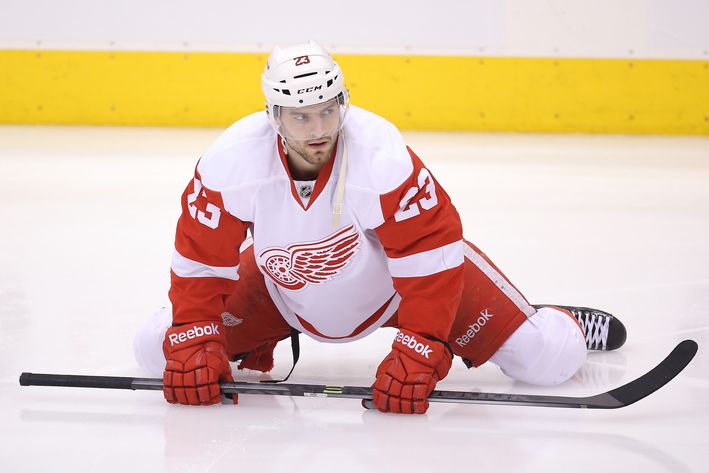 It was reported today by Pierre LeBrun of ESPN/TSN that the Red Wings have placed defenseman Brian Lashoff on waivers:

It’s been a long time coming for a move like this, probably something that should have happened back in October, with Xavier Ouellet being NHL ready. Ouellet has performed quite well in his tenure of 21 games this season. There was a lot of speculation that Jakub Kindl would bet he one to hit waivers, but I think putting Lashoff down makes more sense. Lashoff will more than likely clear, and the Red Wings won’t be stuck with Kindl’s contract at the AHL level.

You can read more about the move here.

To play with the Red Wings in the early-to-mid 1950s meant that you were going to add to your collection of jewelry, especially in the ring department.

Marcel Pronovost was one of those players.

Pronovost, a big, rugged defenseman from Quebec, earned four Stanley Cup rings with the Red Wings, and he did it in an amazingly consistent way.

Pronovost, wearing no. 3, was good for about half a dozen goals a year, a couple handfuls of assists and hundreds of hits. He was a stocky fellow, playing at 5’11” and about 180 pounds.

Pronovost’s style was well-respected throughout the NHL, and that was validated by his 11 All-Star game appearances and five times finishing in the top five in Norris Trophy voting. Red Wings coach/GM Jack Adams once praised Pronovost, who had been compared to the legendary Eddie Shore, by saying that a player like Pronovost only “comes around once every 20 years.”

Perhaps Pronovost’s legendary strength and stamina was a bi-product of his first true love, cross country skiing. But by the time adolescence hit, Pronovost had ditched the skis for skates. It was a smart move.

He wasn’t the only Pronovost who had a thing for hockey. Younger brothers Claude (goalie) and Jean (forward) also made it to the NHL, with the latter playing in nearly 1,000 games in the league. But maybe that was just the law of averages, because Marcel was one of 12 children.

There was one more Cup for Marcel to win in 1967, as a 36-year-old with the Toronto Maple Leafs. He retired in 1970 and immediately went into coaching. In 1977-78, Pronovost coached the Buffalo Sabres to a 44-17-19 record but was dismissed early the next season. For a brief time (1979-80), Pronovost was an associate coach for the Red Wings under Bobby Kromm and Ted Lindsay.

In his later years, Pronovost turned to scouting and in that role with the New Jersey Devils, he acquired more jewelry—three Cup rings. The 53 years that passed between Pronovost’s first Cup and his last is an NHL record.

Pronovost was elected into the Hockey Hall of Fame in 1978.

NEXT WEEK: Metro Prystai, one of the greatest role players in Red Wings history.

Nice piece here by Detroit News beat writer John Niyo, who illuminates one of the big reasons why the Red Wings are flying high: speed.

“But the youth movement that began in earnest last season, when the roster was decimated by injuries, has taken hold. And so has the way some of those younger contributors approach the game — and think it — which has sped up the entire process for the Red Wings as they continue to rebuild on the fly.

“What’s different?” defenseman Brendan Smith said, repeating the question he has heard quite a bit lately. “We’re a lot faster. And I think that’s just because of the youth that we have.

“It’s familiarity, yeah. But I think the biggest thing is we have young guys with quick feet.”

And a hard-driving coach — arguably the best in the game — who insists they keep them moving, shift after shift.

The Corsi numbers — possession-based metrics — rate the Wings as a top-five team at even strength, along with Chicago, Los Angeles, Tampa Bay and the New York Islanders. But you don’t need advanced statistics to see that.” 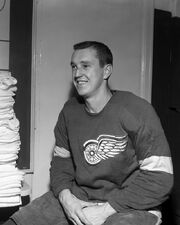 Don Poile was one of those hockey players who found great success in the minor leagues but who wasn’t able to really crack that NHL nut.

But it was in the minors where Poile thrived.

He scored 261 goals playing in four different leagues, with a career high of 42 tallies coming in 1952-53 while playing for Milwaukee in the International Hockey League.

Poile found it hard to work his way into the talented Red Wings lineup, spending most of his time while in the Detroit organization playing for the Red Wings’ minor league affiliate in Edmonton.

Poile, a native of Fort William, ON (as was teammate Alex Delvecchio), had a very famous hockey brother, Bud, who is in the Hockey Hall of Fame in the Builders Category.

In fact, Don played for his big brother, who coached in Edmonton.

It might be a little harsh to say that Marty Pavelich was “scared” into retirement at age 29, but it’s also pretty accurate.

Pavelich was a tremendous defensive forward for the Red Wings, the only NHL team he ever played for (1947-57). His defensive prowess was such that no less than longtime hockey writer Stan Fischler once named Pavelich as the fourth best defensive forward of all time in Fischler’s book, Hockey’s 100: A Personal Ranking of the Best Players in Hockey History.

Pavelich was 20 when he broke onto the NHL scene with the Red Wings after playing four seasons in the Ontario Hockey Association. His game was predicated on checking, with scoring being secondary. His career high in goals was 17, but Pavelich’s job was to “shadow” the opponent’s top scorers.

Pavelich’s reward for his hard work on the defensive end was four Stanley Cups with the Red Wings.

Pavelich’s value to the Red Wings was such that GM Jack Adams once referred to Pavelich as “one of the four key men around whom we build our hockey club.”

Probably Pavelich’s best known opponent to shadow was Rocket Richard, who Pavelich held in high regard.

“Well, Richard, that was my job to check him for 10 years and to me, he was the greatest goal scorer of all time,” Pavelich once said. “Even anybody playing today. Richard would have scored … he had a knack of getting the puck to the net. He was a very determined hockey player. Very, very fierce competitor.”

But at age 29, Pavelich hung up his skates.

He and teammate Ted Lindsay had entered into business together, in the plastics manufacturing field. And when Lindsay was traded in the summer of 1957 to Chicago (as punishment for his efforts to start a players union), Pavelich feared repercussions from Red Wings GM Adams once Adams realized that Pavelich planned to run the business while Ted played in Chicago.

So rather than risk a banishment to the minors or a trade, Pavelich retired after the 1956-57 season.

No doubt there were a lot of NHL goal scorers who raised a glass at that decision!

Marty’s younger brother Matt was an NHL linesman from 1956-79. They became the first brothers to form a player/official combo in league history.

Pavelich is long retired now and is living in Big Sky, Montana.

The 23-year-old right wing, a right-handed shot (desperately needed), has blitzed the AHL with 20 goals and 19 assists in 33 games with the Griffins this season.

This won’t be Pulkkinen’s first taste of the NHL; he played in three games for the Red Wings last season. But his call-up this time figures to be more long term.

The injury bug has hit the Red Wings, and Blashill has been telling Babcock for quite some time that Pulkkinen is ready for a more extended stay in the NHL.

Pulkkinen skated on a line with Riley Sheahan and Drew Miller today before the team flew to Washington, D.C. for Saturday’s game against the Capitals.

“He’s got an unbelievable shot,” Sheahan said of Pulkkinen. “He’s a great skater. I think just for him it’s going to be confidence and coming in here playing his game.”

Pulkkinen said it’s good to be back with the Wings.

“Just hard work,” Pulkkinen explaining the production he’s had with the Griffins. “I had a good summer. When you have confidence you score goals. You play better and better all the time.”

In the history of sport, it is quite possible that no man was as tough and as effective, pound-for-pound, than Ted Lindsay. Certainly not in the world of professional ice hockey.

Lindsay stood just 5’8″ and weighed 160 pounds, soaking wet. He was slight in stature but huge in heart.

The native of Renfrew, Ontario played 17 rugged seasons in the NHL, the last of which came after a four-year “retirement.”

Lindsay popped in 379 goals and spent more than 30 hours in the penalty box over his illustrious career.

But perhaps the true benchmark of Lindsay’s toughness was shown with what he did off the ice.

In 1957, after attending a league pension plan meeting, Lindsay discovered that much of the plan had been kept secret from the players. That raised Lindsay’s ire, and “Terrible Ted” started talking to football and baseball players about their working conditions, and found that hockey was lagging far behind.

It all culminated in Lindsay trying to organize the first-ever players union in the NHL.

The union rabble-rousing earned Lindsay a trade from Detroit to Chicago, but it didn’t quell his passion.

The lack of support from some big name stars, like former teammate Gordie Howe, caused a rift between Lindsay and the non-supporters. Lindsay and Howe, two-thirds of the original Production Line, went several years in the 1960s without really speaking.

Lindsay played three seasons in Chicago before “retiring” in 1960.

Four years later, old teammate and current Red Wings coach/GM Sid Abel talked Lindsay into coming out of retirement for a final fling in Detroit. By this time, legendary Red Wings boss Jack Adams, who traded Lindsay to Chicago, had long been fired.

Lindsay agreed, and wearing unfamiliar no. 15 (his no. 7 sweater was being worn by star Norm Ullman), Lindsay played 69 games and contributed 14 goals and 14 assists—and 173 penalty minutes, of course. Not bad for a 39-year-old!

Lindsay is widely (and rightfully) credited as being the first player to skate the Stanley Cup around the ice, a fact that he confirmed with me in 2006.

Ted explained that he merely wanted to give the fans a look at the Cup. In those days, NHL President Clarence Campbell would make a brief and very understated Cup presentation on the ice, and the players would skate off with it into the dressing room.

Lindsay did some broadcasting after his second retirement, then became the GM of the Red Wings in 1977. His first season was a rousing success (the team showed a 37-point improvement over the previous year), but Lindsay’s gambles on aging veterans and unheralded role players wasn’t sustainable.

The beginning of the end happened in the summer of 1978, when Lindsay signed 33-year-old goalie Rogie Vachon to a rich contract. Vachon was a bust.

In 1980-81, Lindsay was stripped of GM duties but was retained as coach of the Red Wings. But a 3-14-3 start resulted in his firing from that job as well.

Lindsay’s no. 7 hangs from the rafters (it was retired in 1991) and he remains a highly visible member of the Red Wings community. He keeps himself in exquisite physical shape and is due to turn 90 this July.

NEXT WEEK: Marty Pavelich, whose brother Matt was a longtime NHL linesman.